*This post contains some spoilers for Chernobyl. I guess you could also say it spoils The Inventor: Out for Blood in Silicon Valley, if it’s possible to spoil a documentary.

“The bigger the lie, the more they believe.” – Bunk Moreland, The Wire

“Every lie we tell incurs a debt to the truth. Sooner or later, that debt is paid.” – Valery Legasov, Chernobyl

When I wrote about the Netflix documentary FYRE: The Greatest Party That Never Happened, I noted how its douchebro con-man, Billy McFarland, reminded me of a lesson HBO’s The Wire had tried to teach me, before I was quite ready to understand it: “The bigger the lie, the more they believe.” In other words, Billy McFarland is a walking, talking, smirking example of just how wrong The Boy Who Cried Wolf was. The more some people lie, and the more entertaining their lies, the more we believe them … or the less we care whether they’re telling the truth or not, which is, arguably, scarier.

Watching HBO’s own recent documentary, The Inventor: Out for Blood in Silicon Valley, I found myself thinking a lot about Billy McFarland, and about the alternate reality he built around a music festival which was pretty obviously never going to happen. Elizabeth Holmes, the subject of The Inventor, built an alternate reality of her own around her company, Theranos, and around the Edison, a blood-testing device which was hyped, financed, and marketed as a miniature, automated, cheaper alternative to having blood tests done in a lab. No one at Theranos could actually get the Edison to work, and when the documentary shows us what was inside the device, even a layperson like me, who knows more about the sci-fi medical technology of Star Trek than he does about real medicine, can pretty much see why: that many tiny moving parts, handling fragile glass capsules of blood in such a cramped space, seems like a painfully obvious recipe for disaster. But this confidently-sold, vaguely-defined vision of technological magic preyed upon pre-existing weaknesses in our pop culture, much like McFarland’s marketing of the FYRE festival did.

Where FYRE cashed in on the sort of social media-driven superficiality that’s so often attributed to so-called “entitled millennials,” Theranos cashed in on the Silicon Valley mindset which set the stage for all that social media superficiality in the first place. Holmes speaks tech-bro fluently, and hits all the Silicon Valley sweet spots: the Edison will be sleek and compact; it will be fully automated, taking important work (not to mention pesky paycheques) out of the hands of fallible humans (trusting that work, instead, to machines and programming designed by fallible humans); it purports to blend humanitarianism seamlessly with cutthroat capitalism, by equating a real societal issue – the need for more preventative medical care – with the capitalistic priorities of convenience and individualized service; and it’s marketed less as a piece of technology than as a story, one intertwined with Holmes’ own larger-than-life, TED Talk-ready persona. 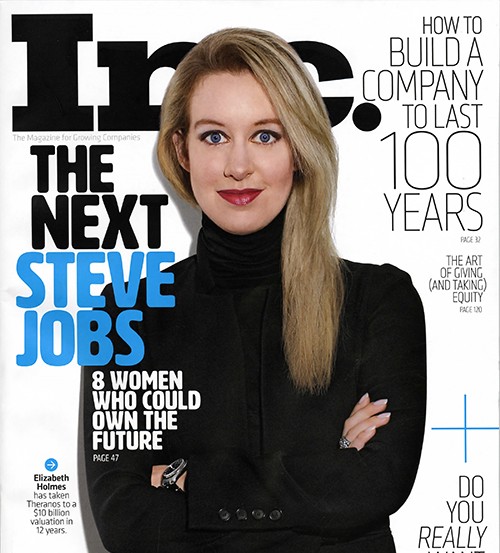 Her tendency to wear black turtlenecks draws many comparisons to Steve Jobs. But it’s worth noting that neither Jobs, nor any of the other inventor-types Holmes is likened to (including Thomas Edison, for whom the Edison was named), were experts in the field of medicine (nor did there seem to be any medical experts among the small army of wealthy, powerful, well-connected old men who attached themselves to Theranos and helped the company raise funds, seemingly without facing the threat of decades in jail which currently hangs over the heads of Holmes and former Theranos president and CEO Sunny Balwani). Much as FYRE was a music festival for which the planning and marketing had almost nothing to do with actually making a music festival happen, the Edison was a piece of medical technology for which the planning and marketing had almost nothing to do with how the medical technology would actually work. Intentionally or otherwise, Holmes exploited Silicon Valley’s tendency to believe its own hype – to believe that big, abstract ideas can essentially alter reality. (Spoiler alert: they can’t.) “The bigger the lie, the more they believe” … especially when you’re telling exactly the sort of lies they already want to believe.

But however terrible and ridiculous a person Billy McFarland may be, his weird little con-man empire feels like small potatoes compared to the events of The Inventor. As far as his scam went before being found out, I get the sense that McFarland’s overgrown-frat-boy “charm” could never have taken him much farther; that he benefited from being able to stay relatively behind-the-scenes, while Ja Rule acted as the more public face of FYRE. Elizabeth Holmes, on the other hand, gave interviews and TED Talks. She appeared on the covers of the sorts of magazines we assume smart people read. Unlike McFarland, Holmes herself probably is smart, and she may well have had big ideas and a genuine desire to help, before drinking too much of the Silicon Valley Kool-Aid. And why on earth would she have ever stopped drinking that Kool-Aid? She had the public support of two former Secretaries of State, and of Joe Biden while he was Vice President of the United States of freaking America. She certainly isn’t the only one to blame for the Theranos debacle; plenty of powerful people willingly played their part, despite the company’s documented unwillingness to explain and verify their science – medical science, science purporting to save lives. If the FYRE documentary feels like a dark comedy, The Inventor gets a little bit closer to horror, or dystopia; it’s not just the story of a liar, it’s the story of a society whose dominant institutions are increasingly unprepared, or unwilling, to distinguish lies from truth.

That sort of real-world dystopian horror reached extreme heights during the events depicted in the recent HBO/Sky scripted miniseries, Chernobyl. It sounds strange to say that one of the most topical and relevant TV series I’ve seen in some time, as a quote-unquote Westerner living in 2019, is a docu-drama set so specifically in the Soviet Union of the 1980s … but, well, here we are. Granted, the details are different. Where FYRE and The Inventor depict a contemporary West in which big talk hides the lack of substance behind big ideas, Chernobyl shows us what feels, at first, like the exact opposite; a culture of carefully and deliberately saying nothing, a culture in which almost everyone, at almost every level of power and influence, goes out of their way not to be seen as someone with big ideas, for fear that those ideas will get them fired, or arrested, or worse. (I’ll just note here that my knowledge and understanding of the actual, historical Soviet Union, and of the contemporary nations which formerly belonged to it, is limited, to say the least; my comments are based only on what I saw on screen during the fictionalized mini-series.) But as I watched Chernobyl, I found myself returning more and more to thoughts I’d had during The Inventor. I thought about what is sometimes referred to as our current “post-truth world,” in which there often seems to be mainly upsides, rarely downsides (at least in the short term), for those who casually contradict observable truths, who mock and deny even the very idea that there is such a thing as objective reality. In The Inventor, we see this in the Silicon Valley mindset which allowed Theranos to thrive (for a time) on nothing, a mindset so focused on ambition and “disruption” that those who point out the limits of reality can be dismissed as lacking ambition, failing to think outside the box. In Chernobyl, on the other hand, its characters are pressured to think inside the box, to say and do nothing contrary to the official party line. But the end result is weirdly, uncomfortably similar: an environment in which objective reality is almost entirely obscured by the rhetoric of the powerful and well-connected … until the point at which it simply can’t be ignored any longer. 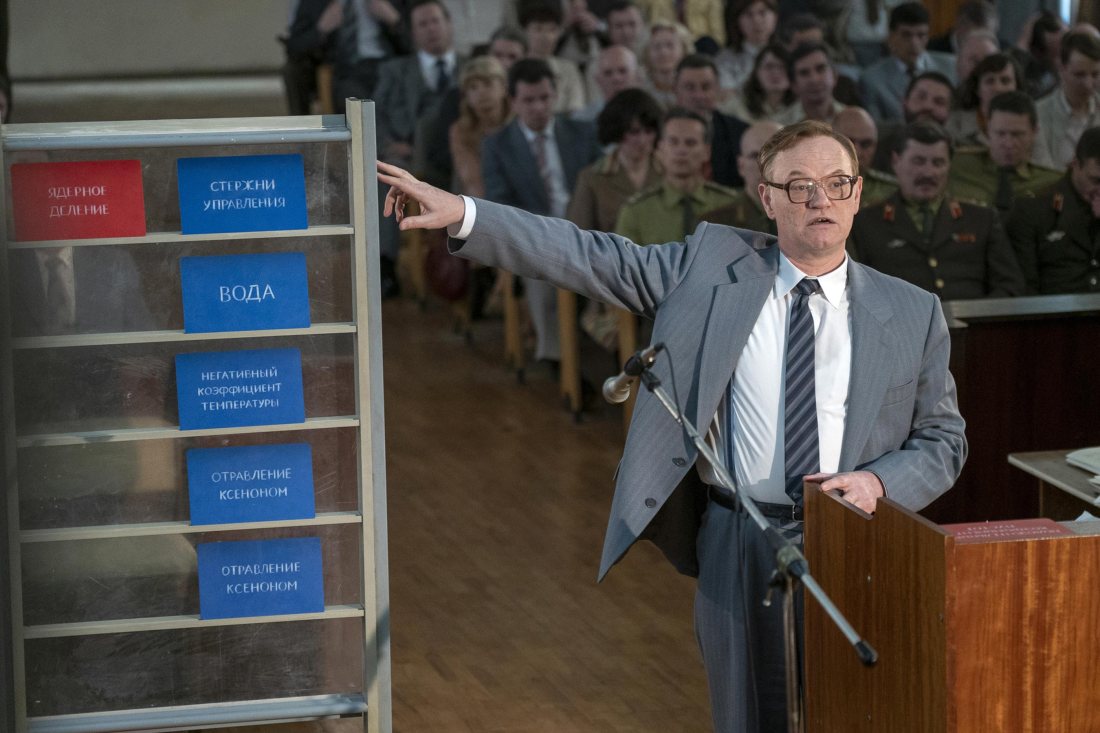 In Chernobyl, the part of objective reality is played by radiation, and by the ultimately undeniable science behind it. Radiation is practically the star of the mini-series, a constant, existentially terrifying presence making itself known through burnt skin, bloody coughs, and the nightmarish clicking of Geiger counters. For all its powerful acting, and its impressive set and sound design, it was that ever-present threat – and its inevitable, lasting effects – that kept me absolutely riveted through much of Chernobyl. It’s deeply unnerving, and deeply moving, to watch character after character drawn into the massive project of dealing with the power plant meltdown, knowing as we do (and as scientist Valery Legasov does, and as the others gradually learn) that their proximity to the plant is literally taking years, or decades, off their lives, even as the Soviet state officially denies any such danger. Chernobyl is, like The Inventor, the story of a society so willing to live with lies that it no longer recognizes them as lies. But The Inventor makes its liar – or one of them, at least – the main focus, framing its stories of whistle-blowers around the principle story of Elizabeth Holmes’ downfall. Chernobyl spends less time on its liars than on the poor bastards tasked with cleaning up the liars’ mess. Radiation may be the star of the show, but we only feel its presence through the impact it has on the lives of the matter-of-factly selfless scientists, and firefighters, and soldiers, and miners, and just plain regular people who don’t have the luxury of pretending there isn’t a nuclear meltdown going on. If The Inventor is the next, more serious step after FYRE, then Chernobyl takes that progression to its logical, horrifying, heart-breaking endpoint, depicting a society whose people must, however unfairly, deal with a reality their institutions not only failed to prevent, but refuse to even acknowledge.

The problem isn’t that we live in a post-truth world. The problem is that we don’t. Yes, we’ve built a politics and an economy which actively reward those who deny the existence of objective reality. But objective reality doesn’t give two shits whether or not we acknowledge its existence. It simply exists, regardless. It builds up in the background, like radiation. Some of us have our Geiger counters turned on, and are terrified by the clicking. Some of us hear it, but pretend – or imagine – that we don’t, or that the clicking isn’t fast enough to worry about yet, or that the clicking is a good sound, actually. Some of us can’t hear the clicking, over the raucous applause for our TED Talks. It doesn’t matter. At the end of Chernobyl’s final episode, we’re told that the crowd who gathered on a bridge to see what was happening at the power plant – a crowd who had no idea of the radiation pouring out of that plant – likely all died from their exposure to it, one way or another. The radiation didn’t care that those unfortunate people had no Geiger counters, that they couldn’t hear any clicking. Any number of Soviet officials insist, throughout the mini-series (as they presumably did throughout the real disaster that inspired it), that the danger is non-existent, or greatly exaggerated, or real but contained. But those officials didn’t live in a post-truth world, any more than we do now. They were – as we might be – simply post-equipped-to-deal-with-the-truth.